A pulley is a simple machine that can be used to lift objects and transmit motion. Pulleys can be either movable or fixed and multiple pulley wheels on one axle can be used ad block and tackle. 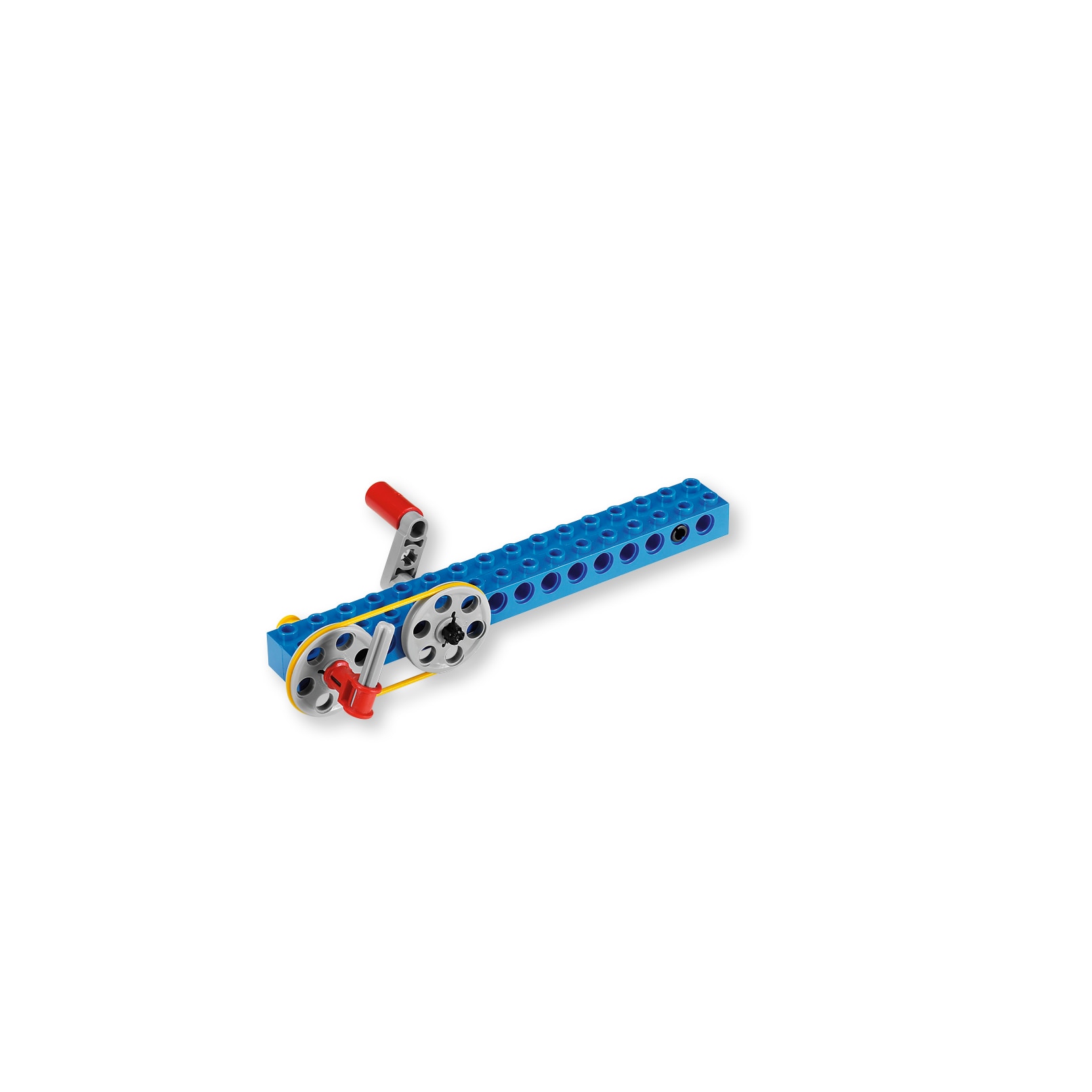 Pulleys are wheels that are moved by ropes, chains or belts around their rims. 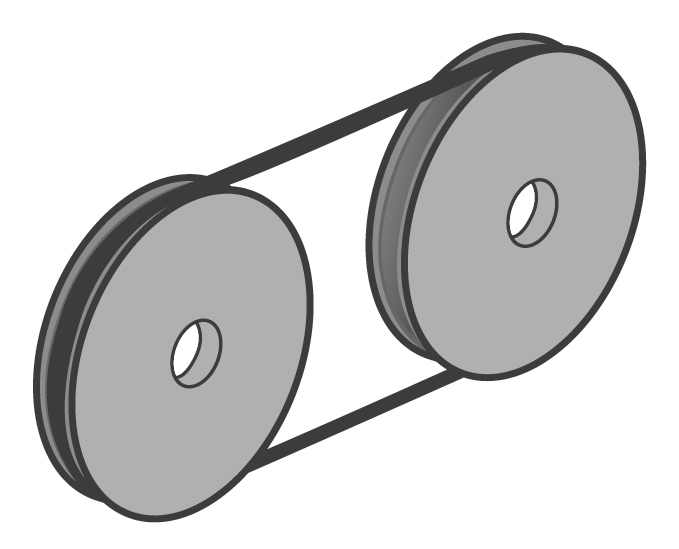 Belt driven pulleys rely on belt friction to transmit motion. If the belt is too tight the belt will create wasteful friction forces on the pulley axle and bearing. If too loose the belt will slip and the effort is not used efficiently. Slip is an overload protection safety feature of belt-operated machinery.

For heavy lifting jobs; multiple pulley wheels can be combined into a lifting system that makes lifting heavy objects easier.

Did you know?
Pulleys started the age of mass production in England, when they were produced at the beginning of the 19th century to supply the British Royal Navy with pulley blocks for their war ships during the Napoleonic Wars. 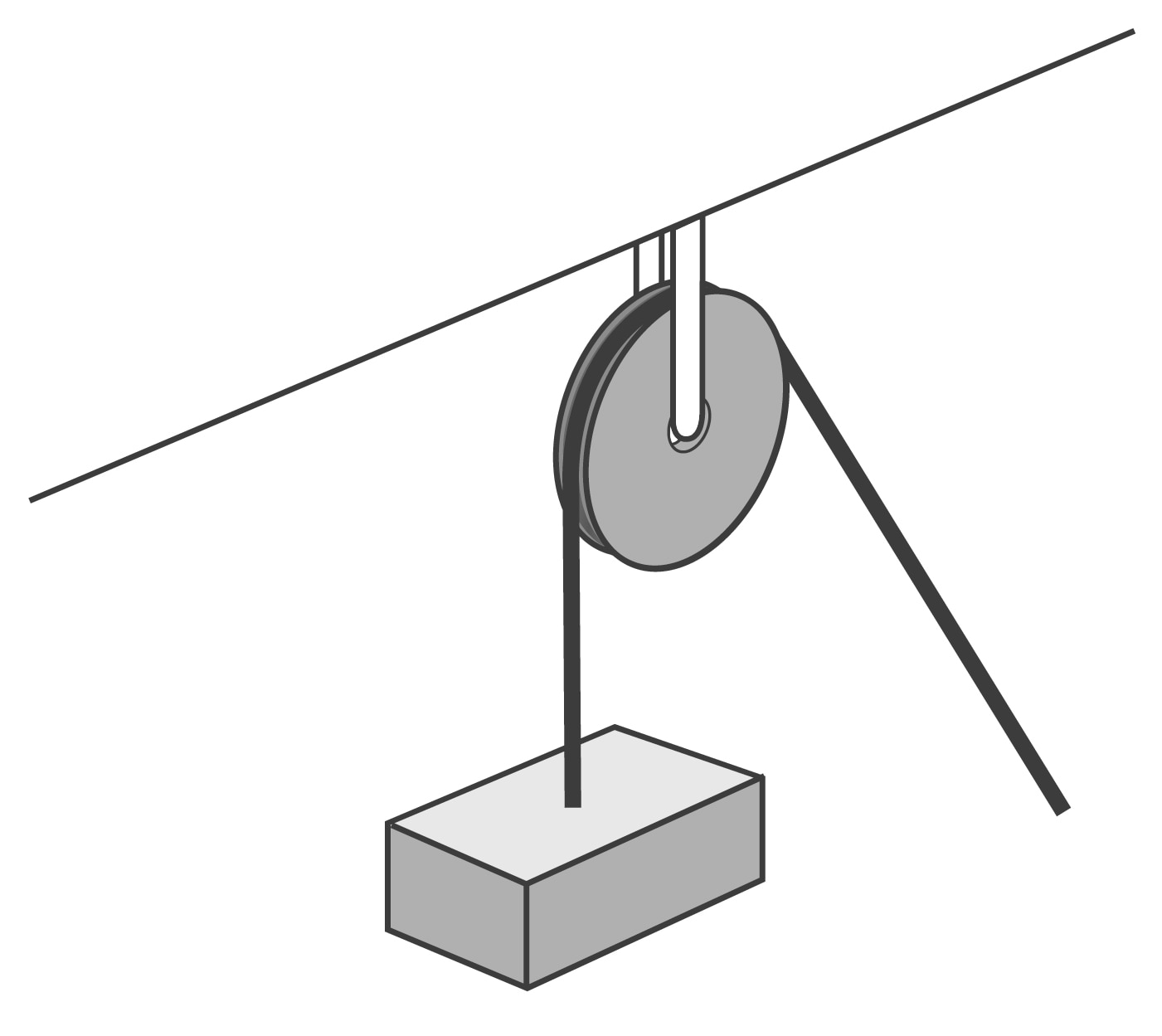 Using a single pulley to lift a load doesn’t make it easier, but it changes the direction of motion without any gains in speed or required effort. It only allows you to lift a load up by the pulling of the rope. Pulleys can be either movable or fixed. The difference between fixed and movable pulleys are that fixed pulleys do not move up or down when the load is being moved.
A fixed pulley is often fixed to an overhead beam or rafter and will only be able to rotate around its own axle. The use of multiple pulley wheels on one axle, in a lifting or dragging system, is called a Block and Tackle.

Common examples of pulleys are found in window blinds, curtains and flagpoles. 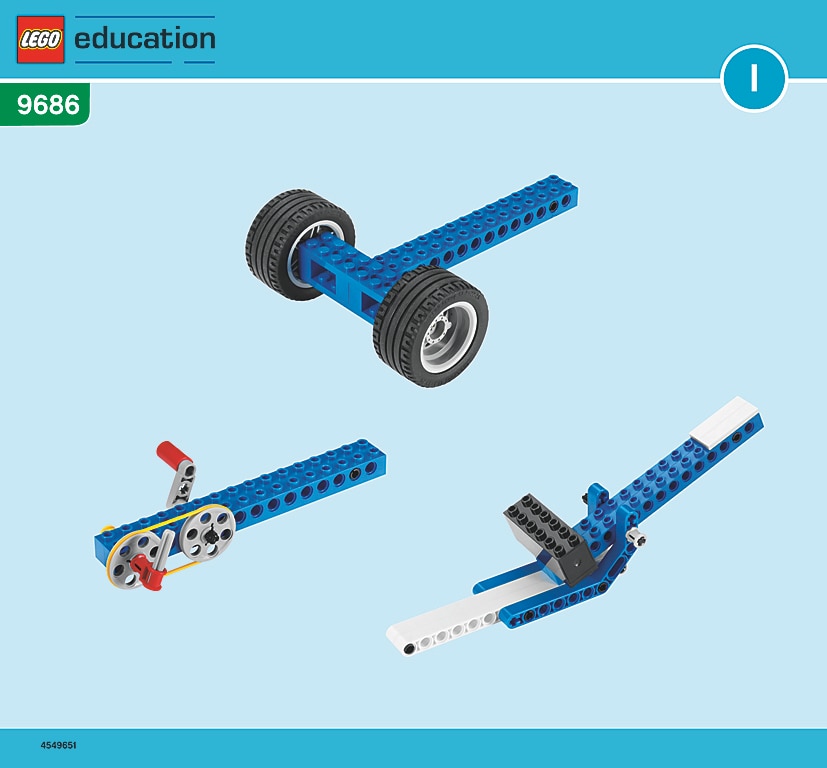 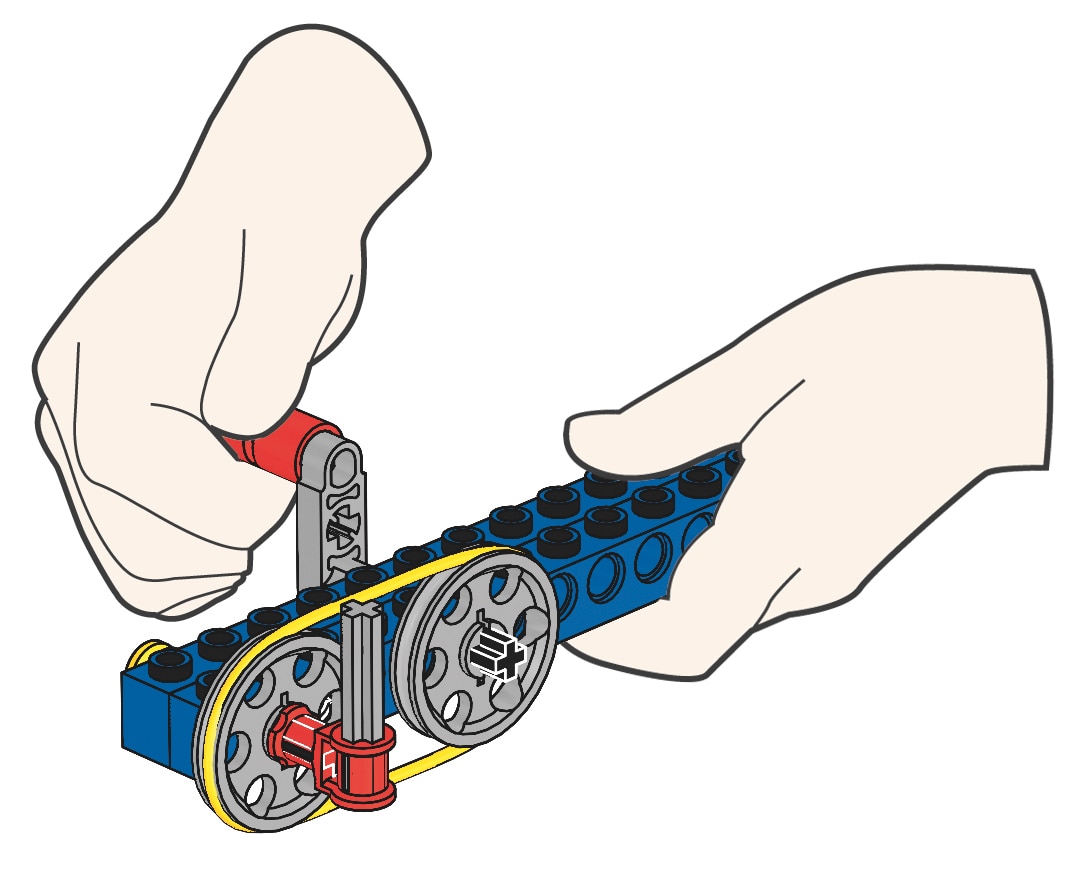 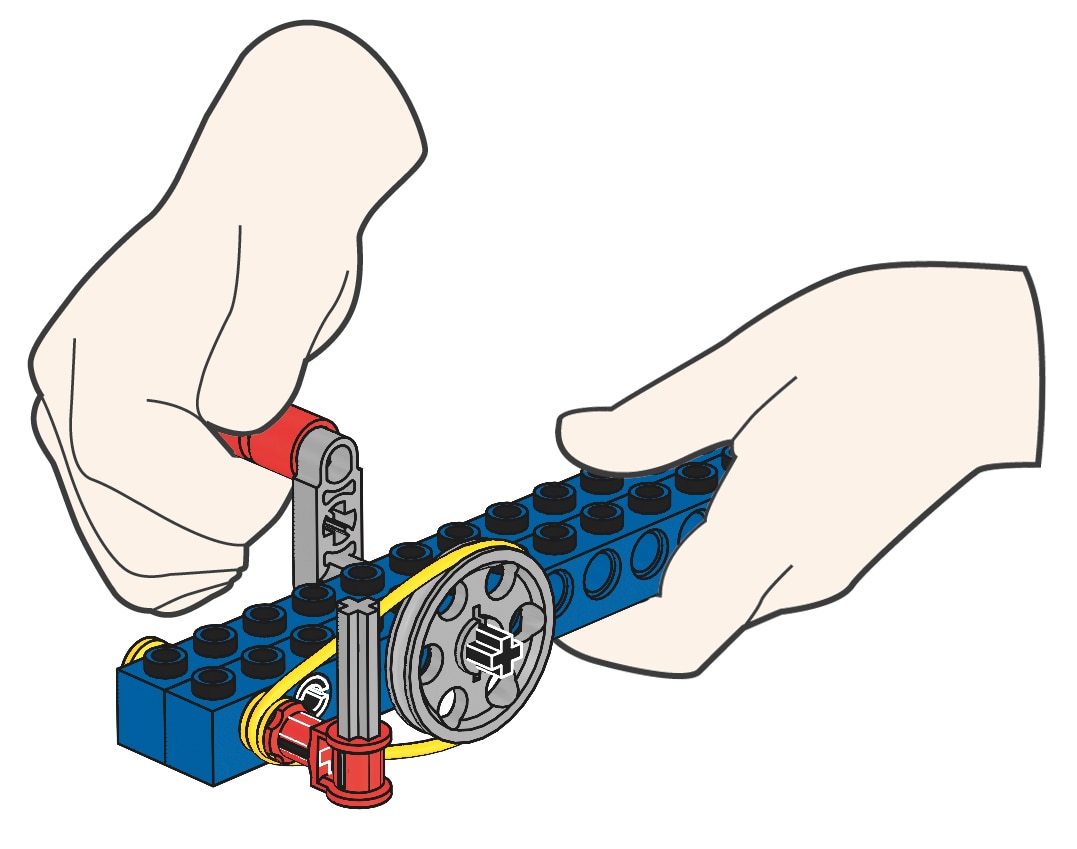 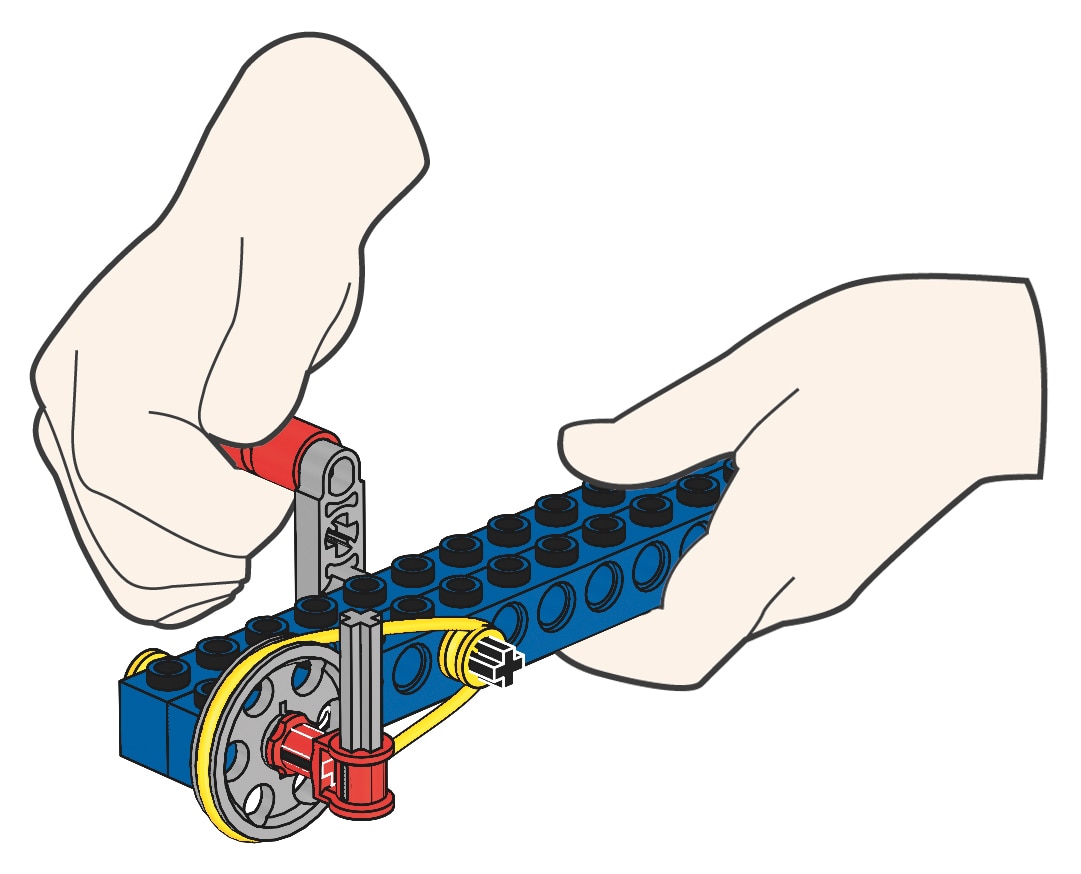 C4
This model has a mechanical advantage of 1. The model is a belt driven pulley where the speed of the drive and driven pulley wheels are the same, but they turn in opposite directions because the belt is crossed. 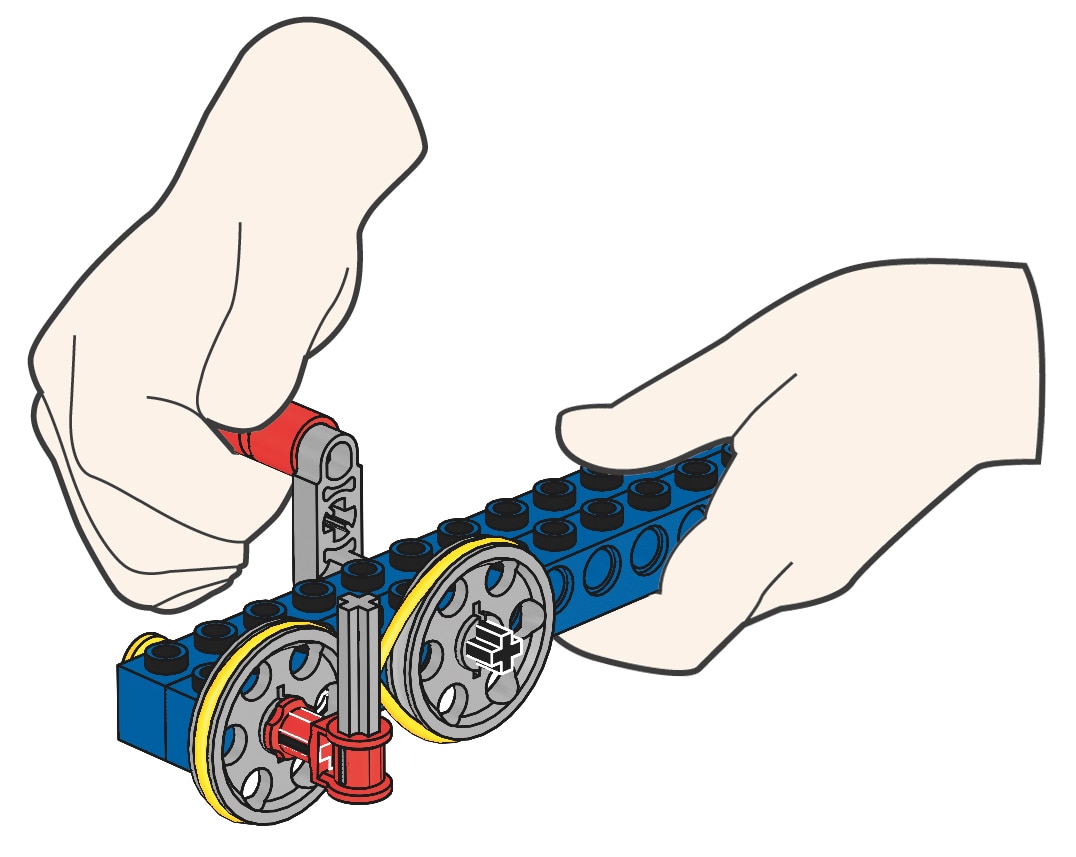 C5
This model has a mechanical advantage of 1. The model is a belt driven pulley where the speed of the drive and driven pulley wheels are the same, but there is a change in the angle of motion caused by the twist in the belt. 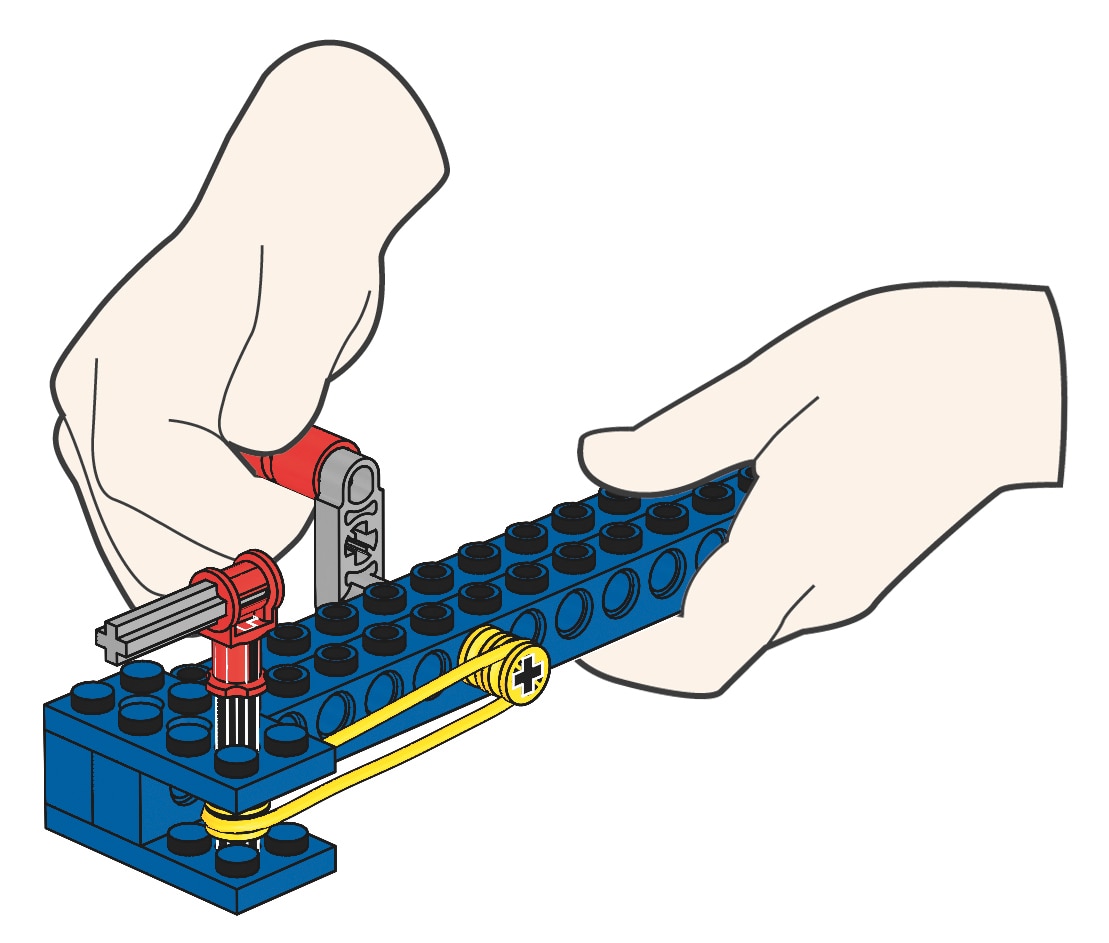 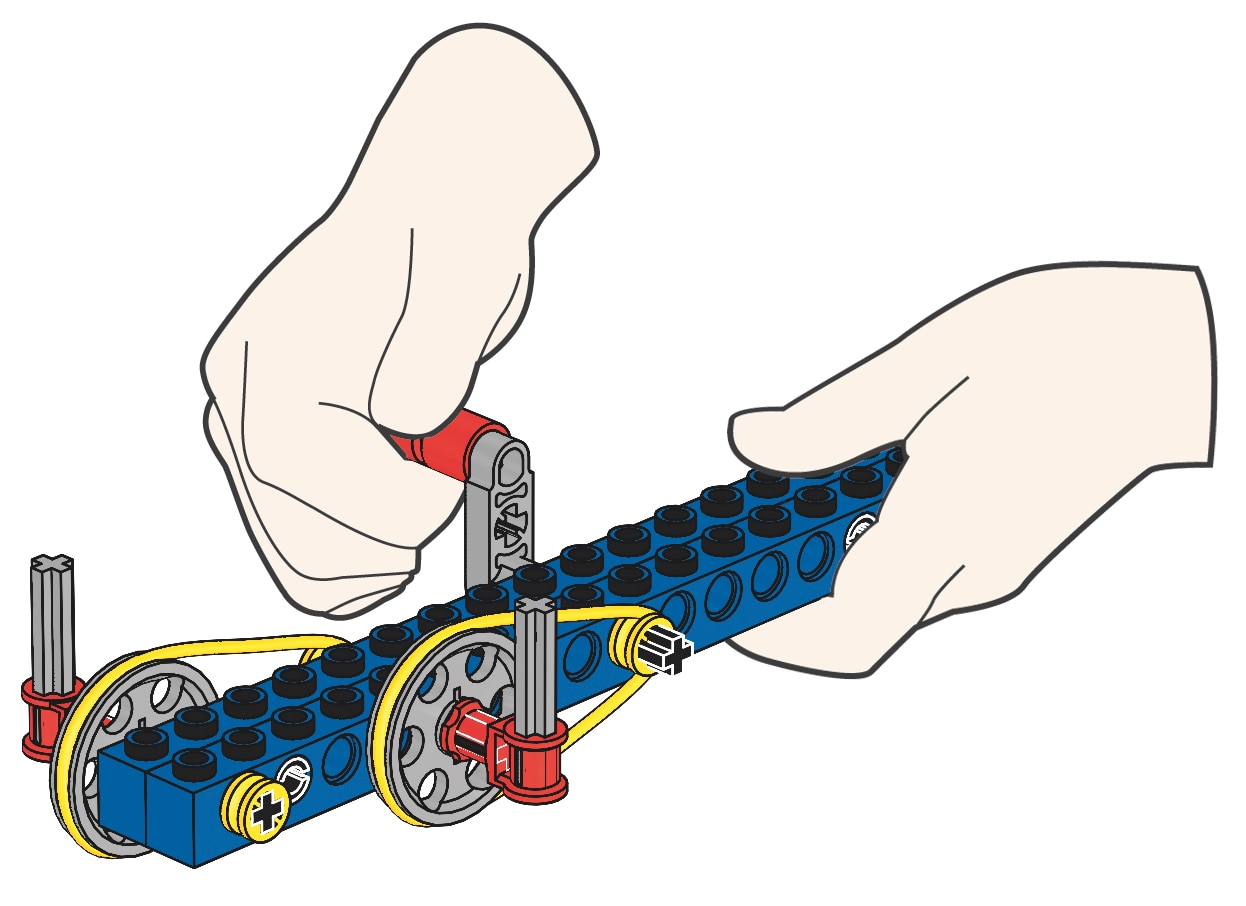 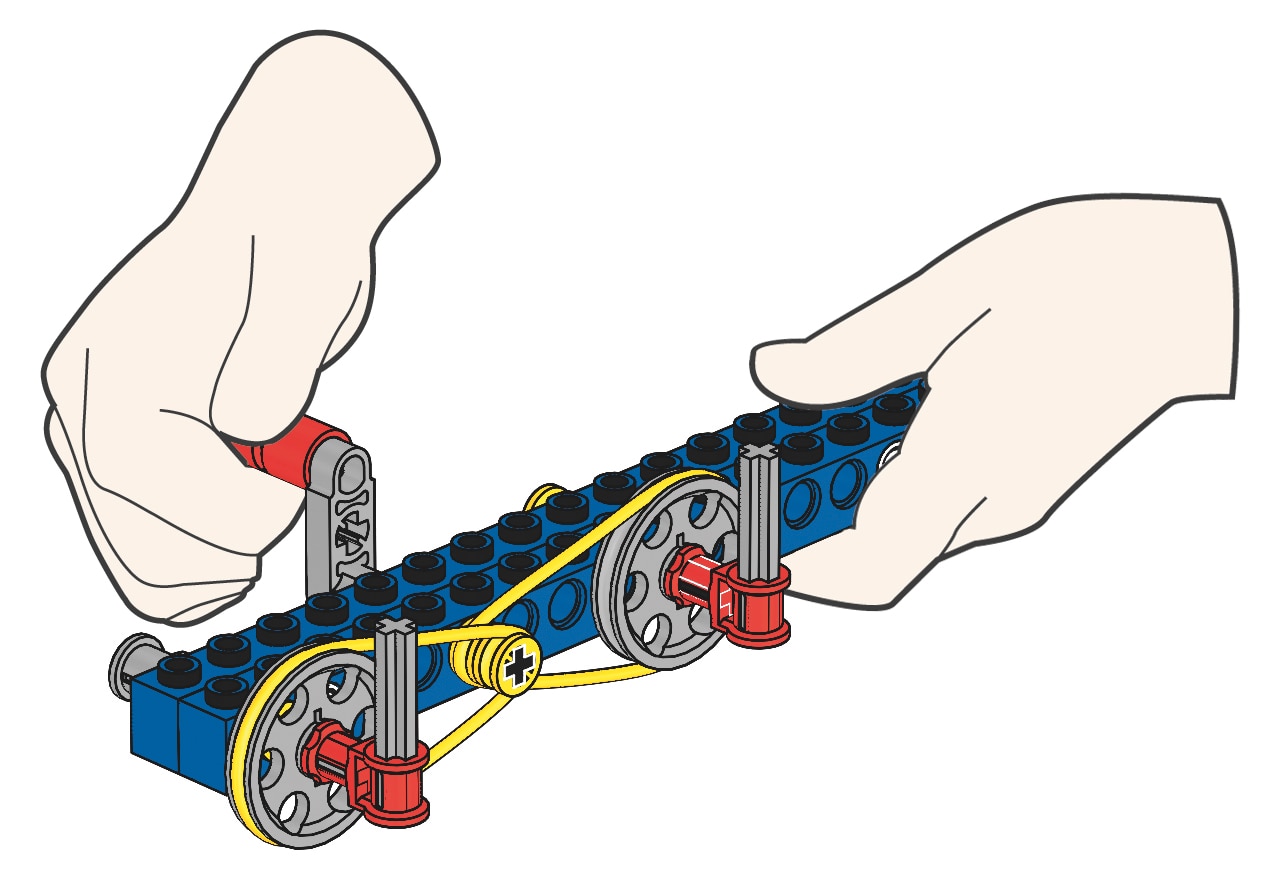 C8
This model has a mechanical advantage of 1. Meaning that the model generates no increase or reduction in needed effort, speed or distance. The full load of the LEGO® weight element is simply being lifted up or lowered.

C9
This model has a mechanical advantage of 1, meaning that the model generates no increase or reduction of needed effort or speed. It only changes the direction of motion. 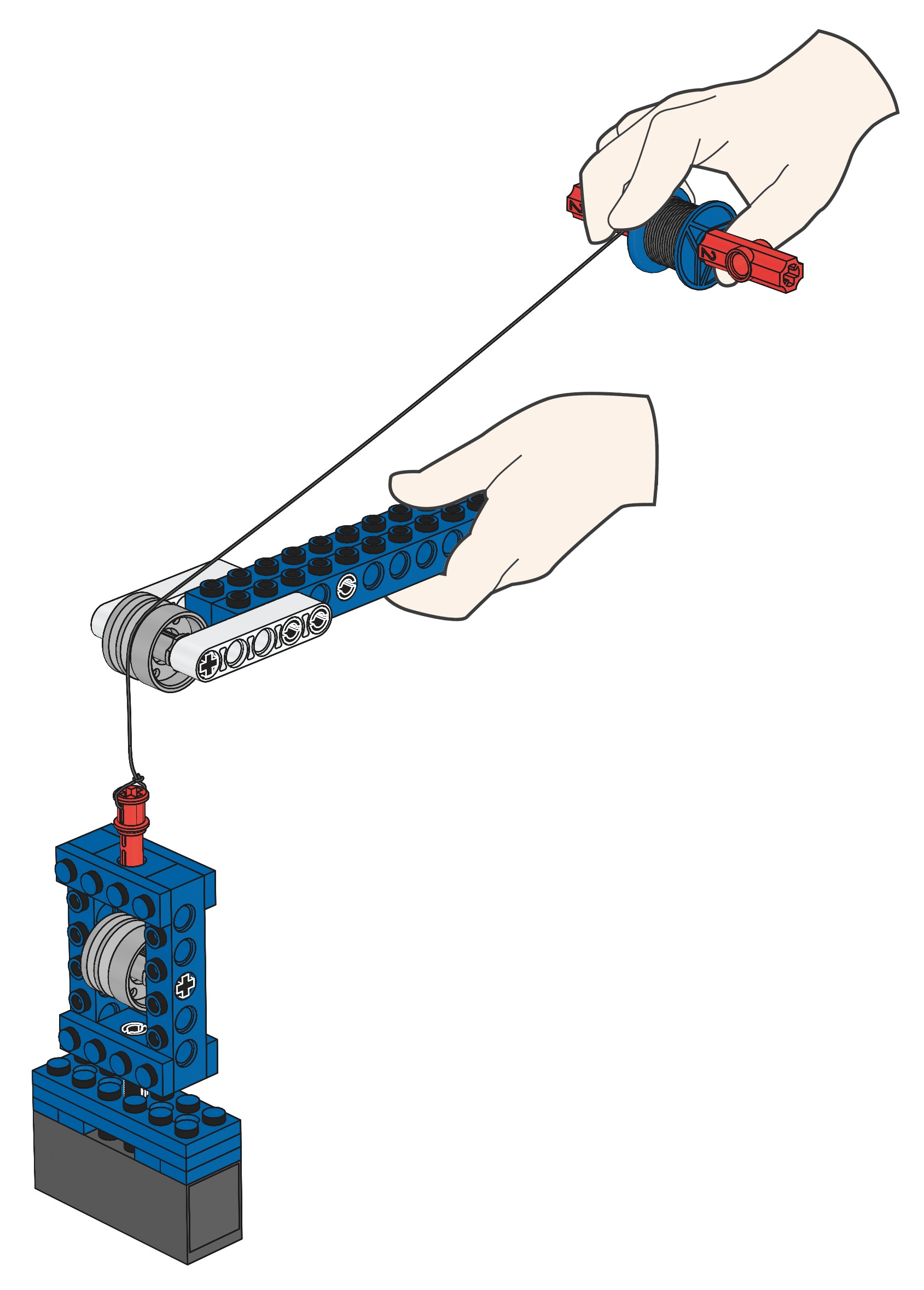 C10
This model has a mechanical advantage of 2, meaning that the model halves the effort needed to lift the load, but also reduces the speed at which the load is lifted. You must pull twice the length of string to lift the load. 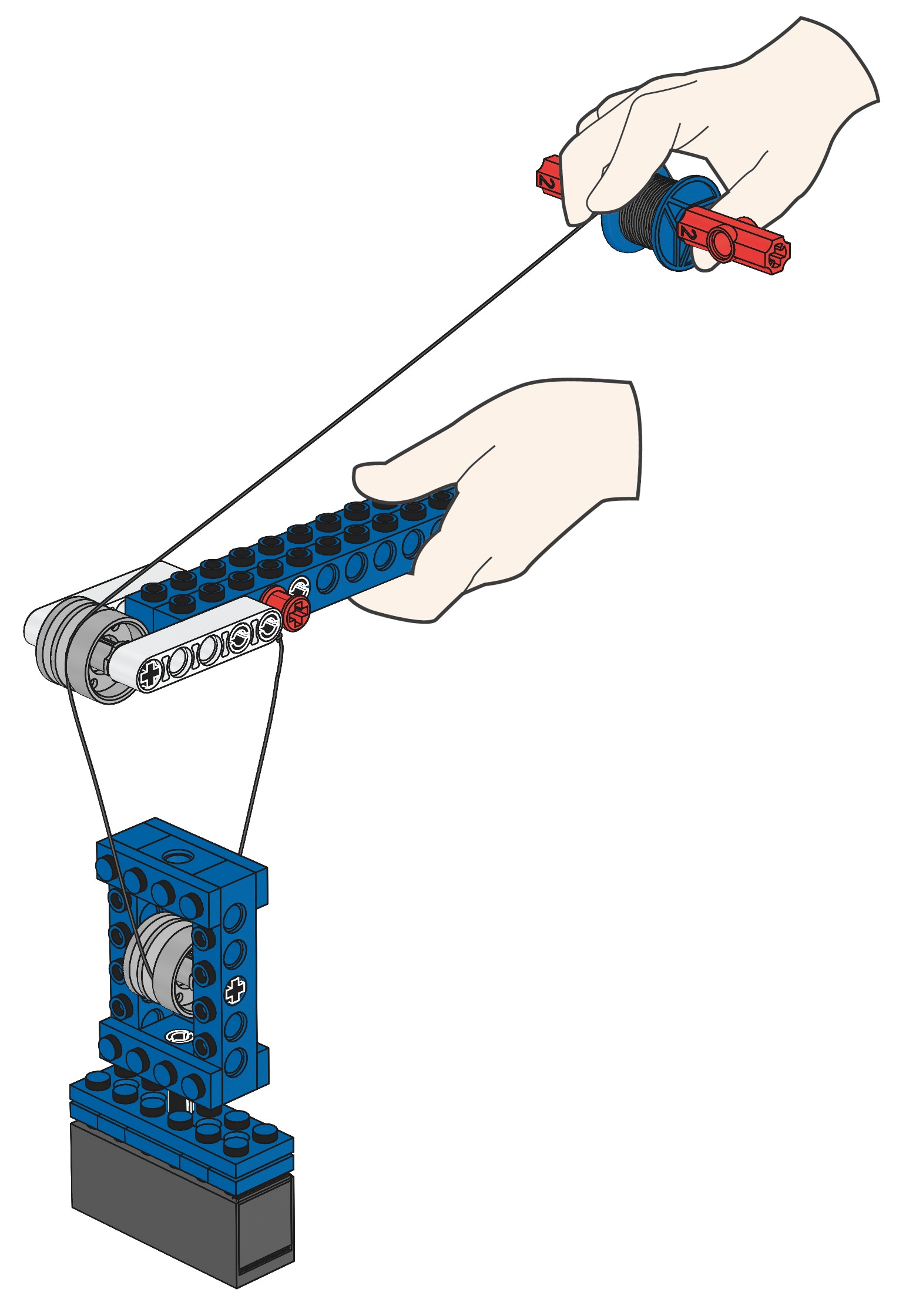 Try other cam lessons!
Now that you have mastered the principles of pulleys try some of the other lever lessons like Fishing Rod.