Explore the scientific concepts of pulleys, levers, pawl and ratchet, forces and properties of materials. 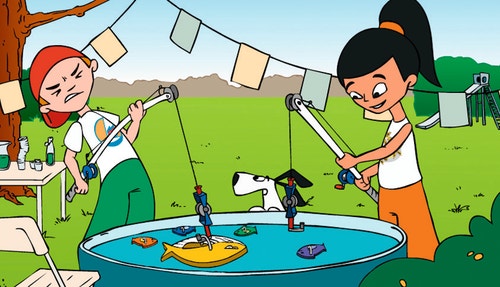 Jack and Jill are at a friend’s birthday party with some other children. They are in the garden and they have been selected to catch fish in the new Fishing Pond.

They have great fun, when suddenly Jack catches the largest and heaviest fish in the pond. Even using all his strength, he can’t reel in the heavy fish.

Jill gets an idea as to how to reel in the fish. What do you think she plans on doing?

How can we make an exciting fishing device for Jack and Jill, and land the large fish?
Let’s find out! 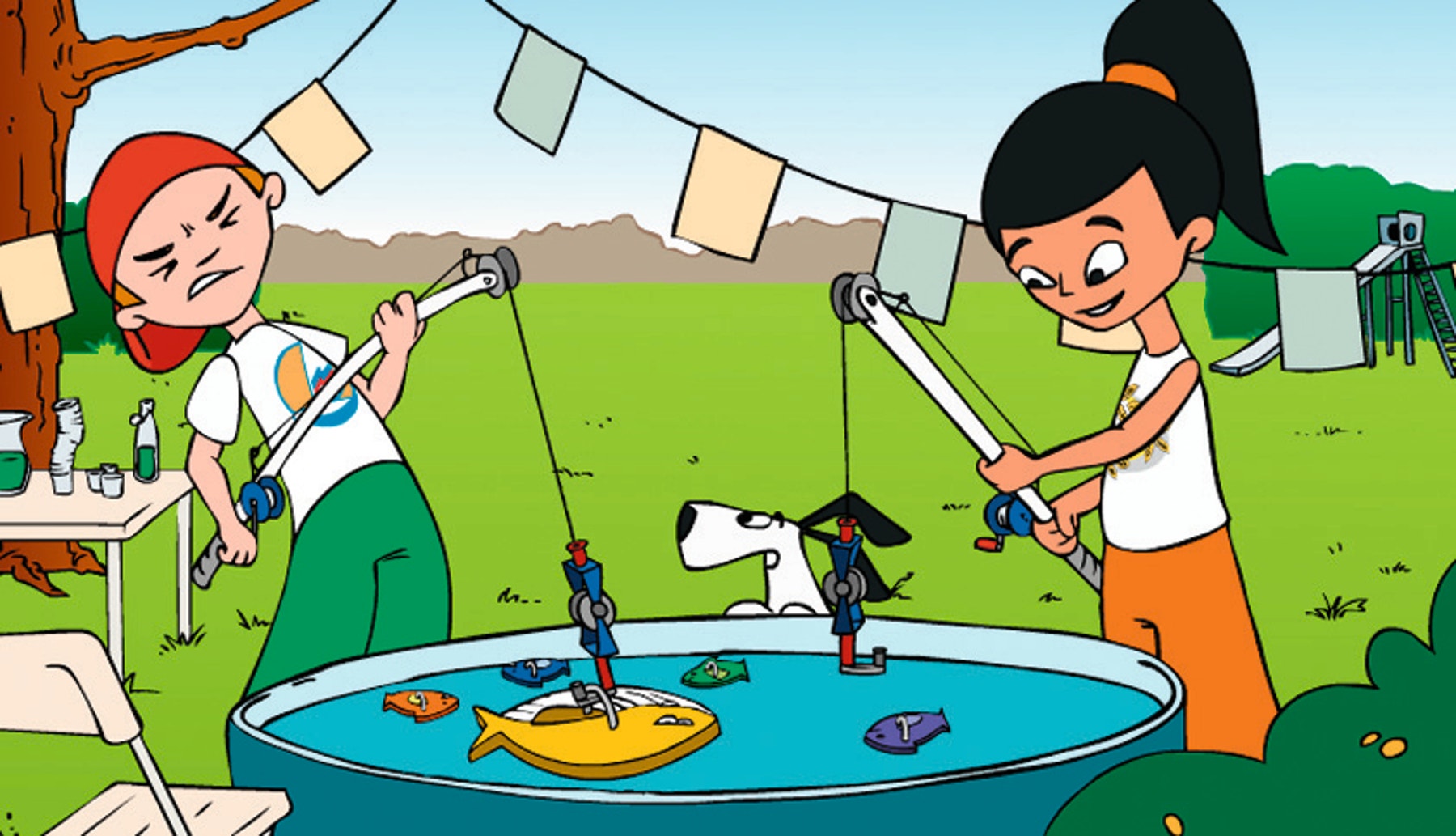 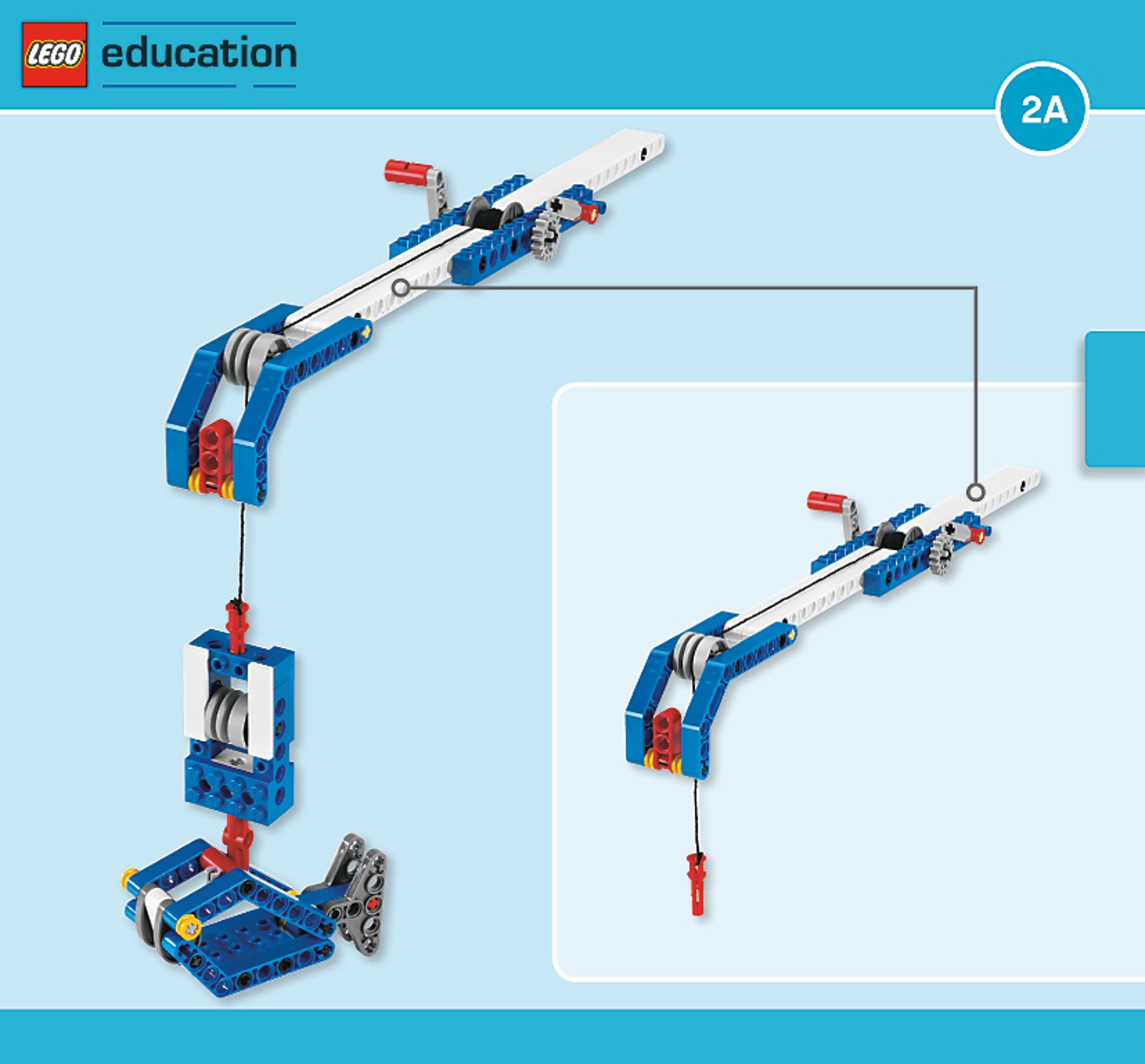 Fine-Tune Your Fishing Rod
Loosen any overly tight bushings so that the reel and pulleys roll freely. If not, the tests will not work properly.

Test to See If You Can Catch the Fish
You may need more than one attempt. Try catching a fish and releasing it from the hook several times. 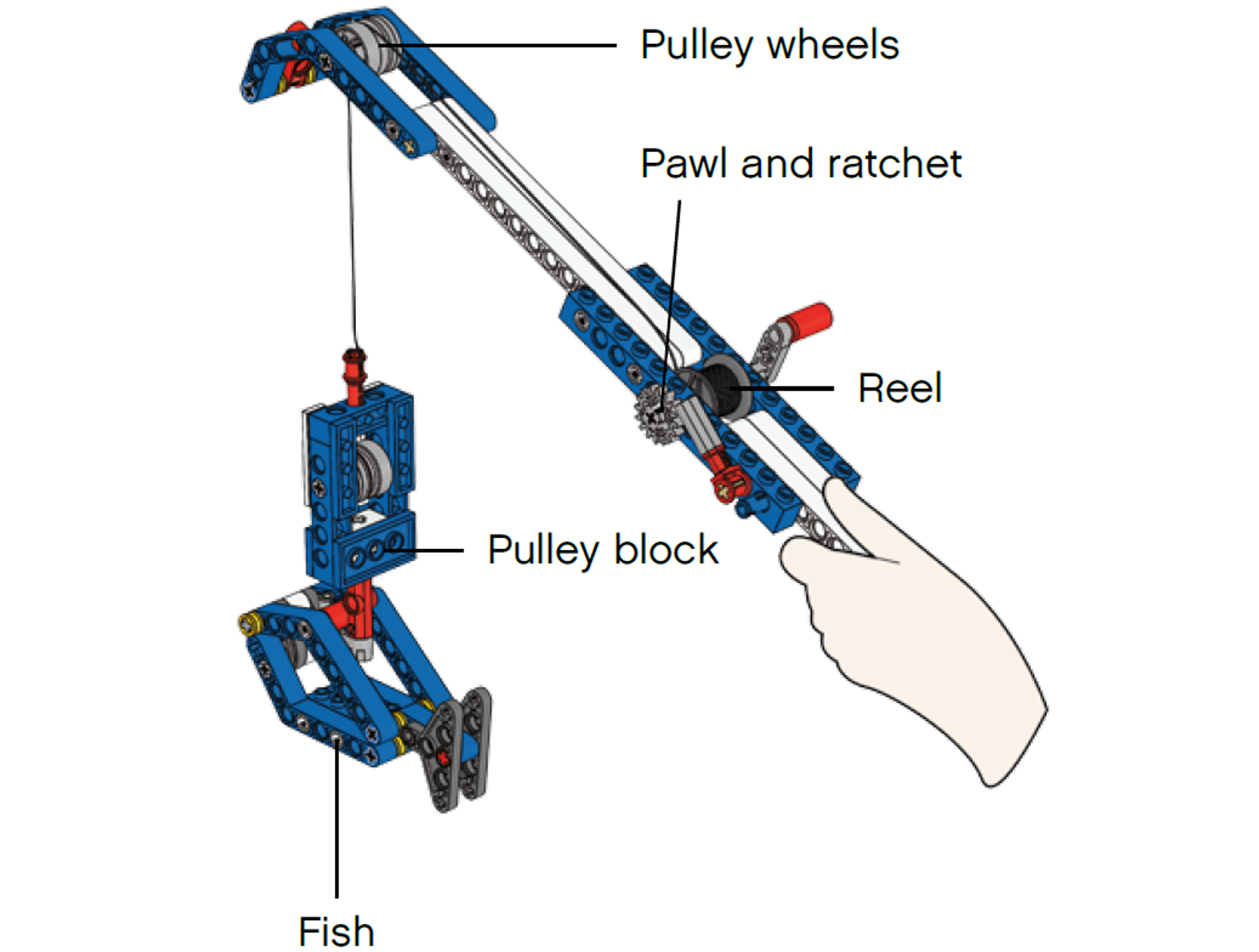 Why use a reel and ratchet?
Try first lifting the large fish by simply pulling on the line. Then, lift using the reel. What do you notice?
Try the pawl and ratchet safety system (book 2A, page 10, step 19).

What are the advantages?
The reel makes it easier to lift the fish. But it is slower than pulling the line by hand. The ratchet locks the reel if you stop winding. This is a safety system. 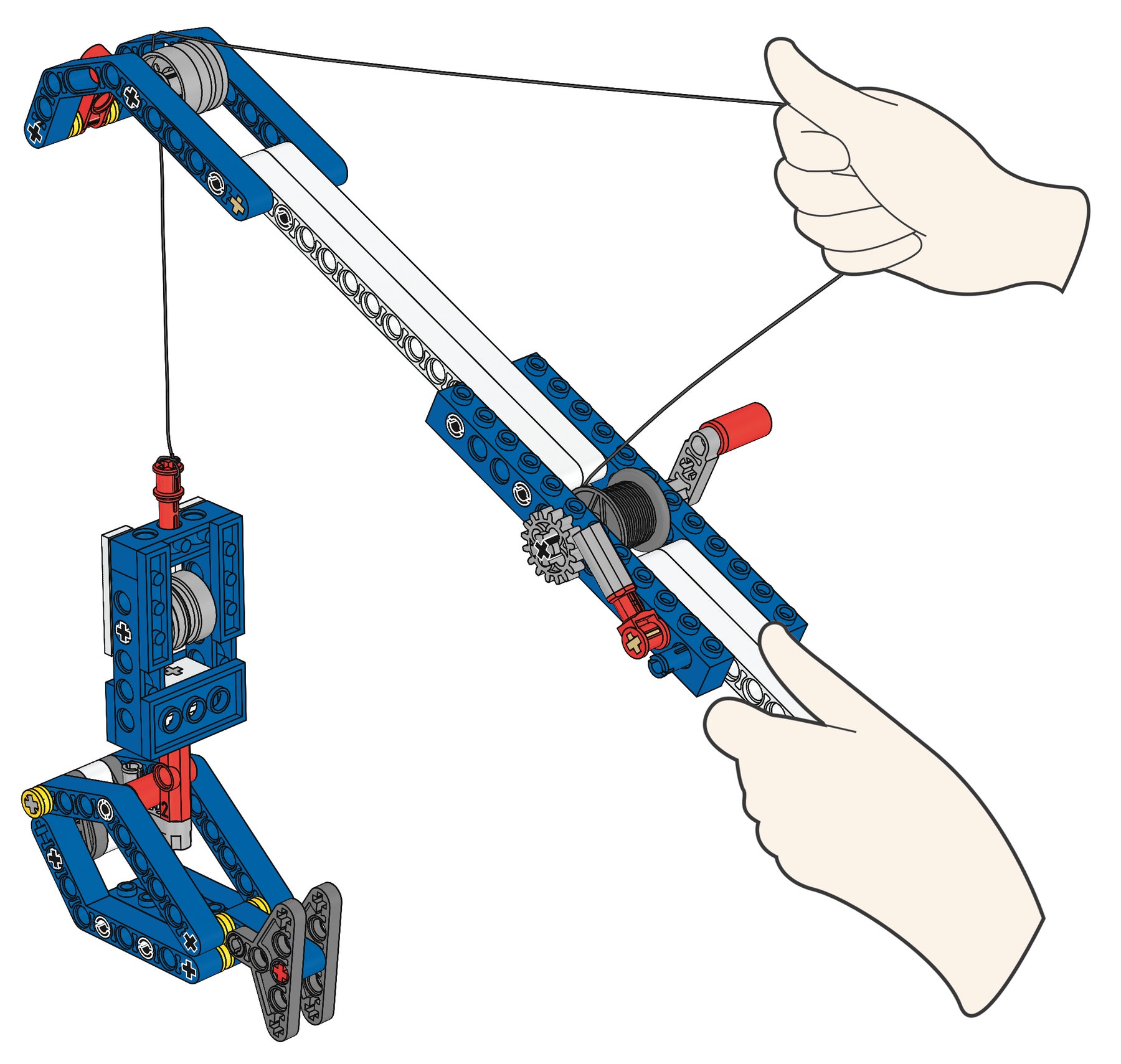 What difference does an extra pulley make?
Set up the Fishing Rod as illustrated here. Predict and test which effects this might have when landing fish?

It actually feels heavy. This is because the second pulley is not being used – it is a fixed pulley. Pulleys are dead weight unless they are properly connected! 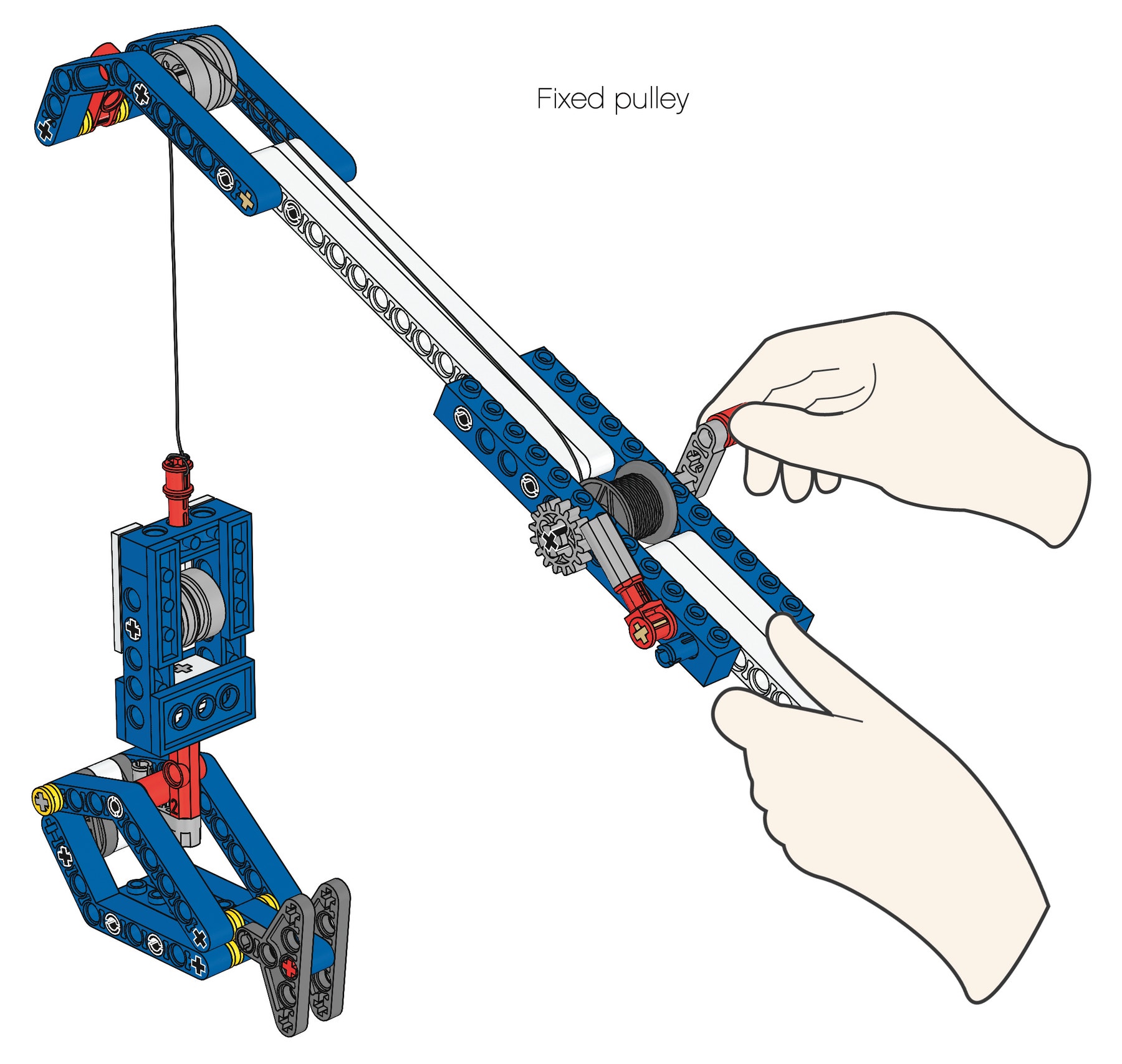 String up the pulley block as shown on page 11, step 20. Predict and test what effects this setup might have when landing the fish?

Even the heaviest fish is easier to lift. Using two pulleys – one fixed and one movable – means only half the effort is needed to lift the fish. But it is slower to reel in and you need to wind in twice as much line to reel in the fish.

Did you know?
Big cranes use this system to lift heavy loads with small motors. Some pulley systems, also called a block and tackle, use up to six or more pulley wheels! 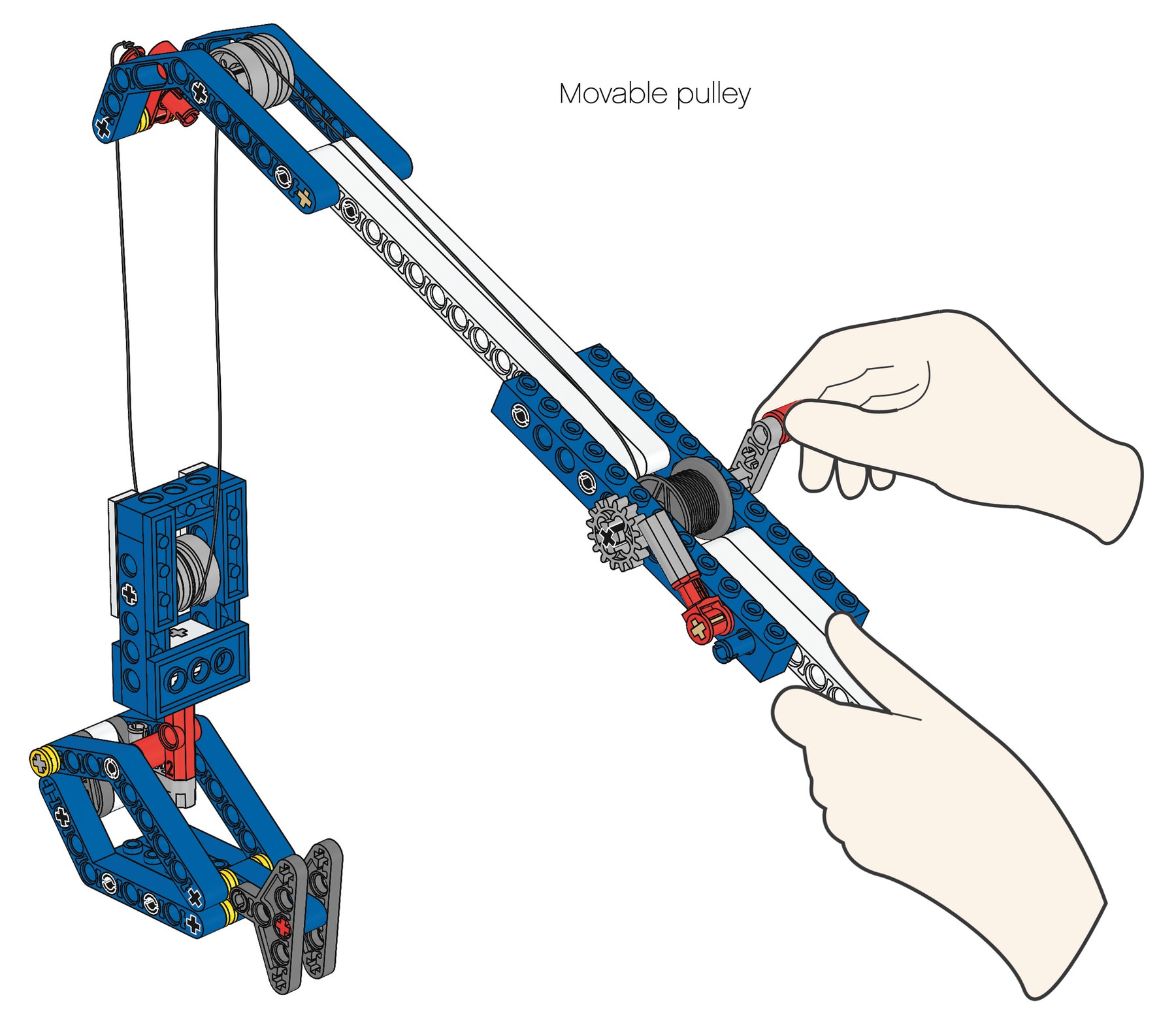 Add a load (the weight element) to the fish and test again with your Fishing Rod. Find out which is the easier way to land the heavy fish.

Did you know?
The weight element contains steel plates and weighs exactly 53 g!

Design and Make Your Own Crazy Fishing Game
In the shortest possible time catch as many ‘fish’ as you can.
Build a variety of ‘crazy fish’ as shown. Invent more of your own. Maybe you can make them look more like real fish?

Hook them and see which are easy and which are more difficult to catch.

Agree on rules and a scoring system for your fish. Which designs would trigger a higher score if a fish is landed?

Play a timed game. What score did you get in 60 seconds?

Try again. How much did your score improve with each new attempt? 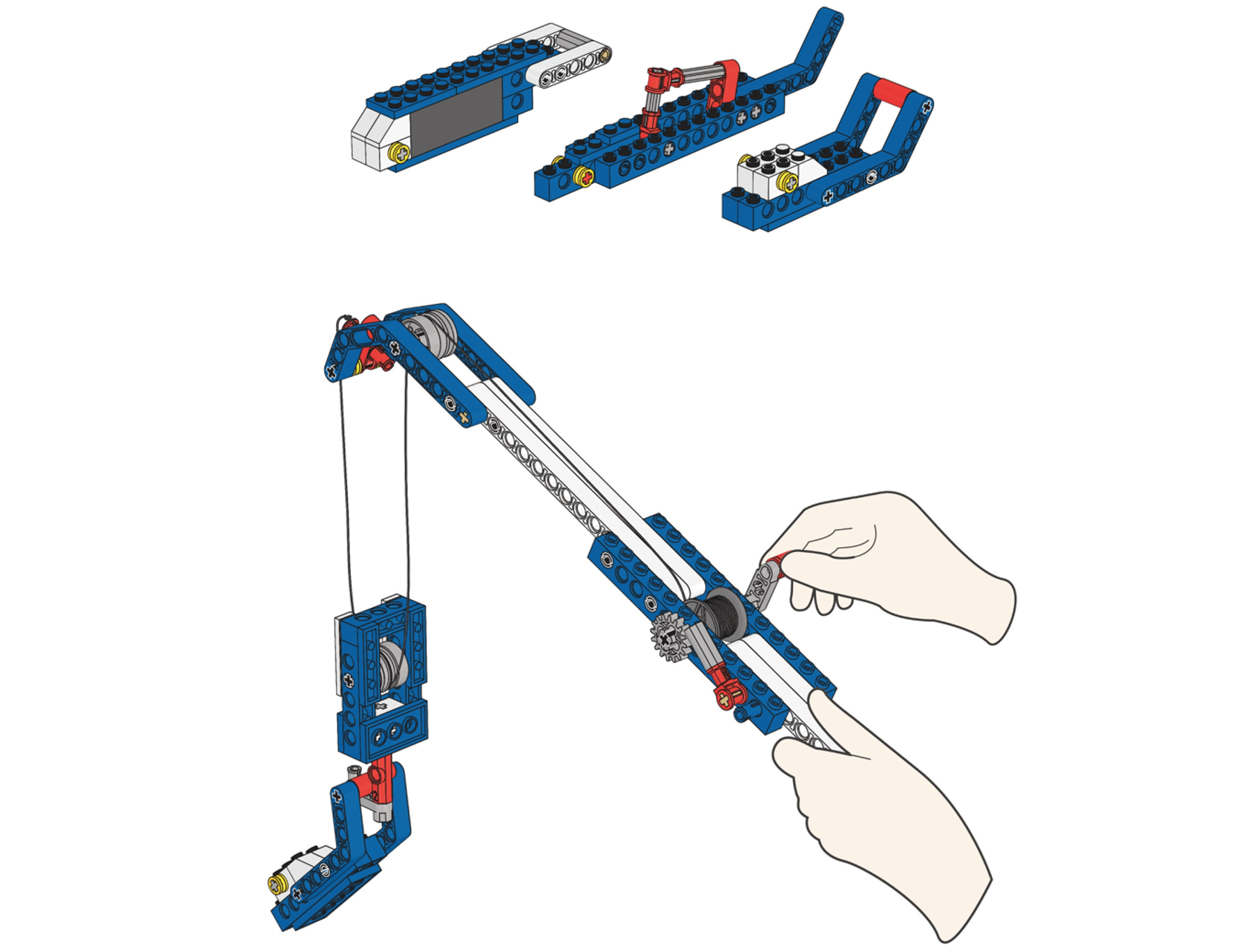 Extra Challenge: Sorting Fish
Design a game board with different sized targets or ‘baskets’ in which to place the fish.

Work out additional scores for successfully landing a fish in a basket.

Ask another team to join in the great ‘fishing game’. 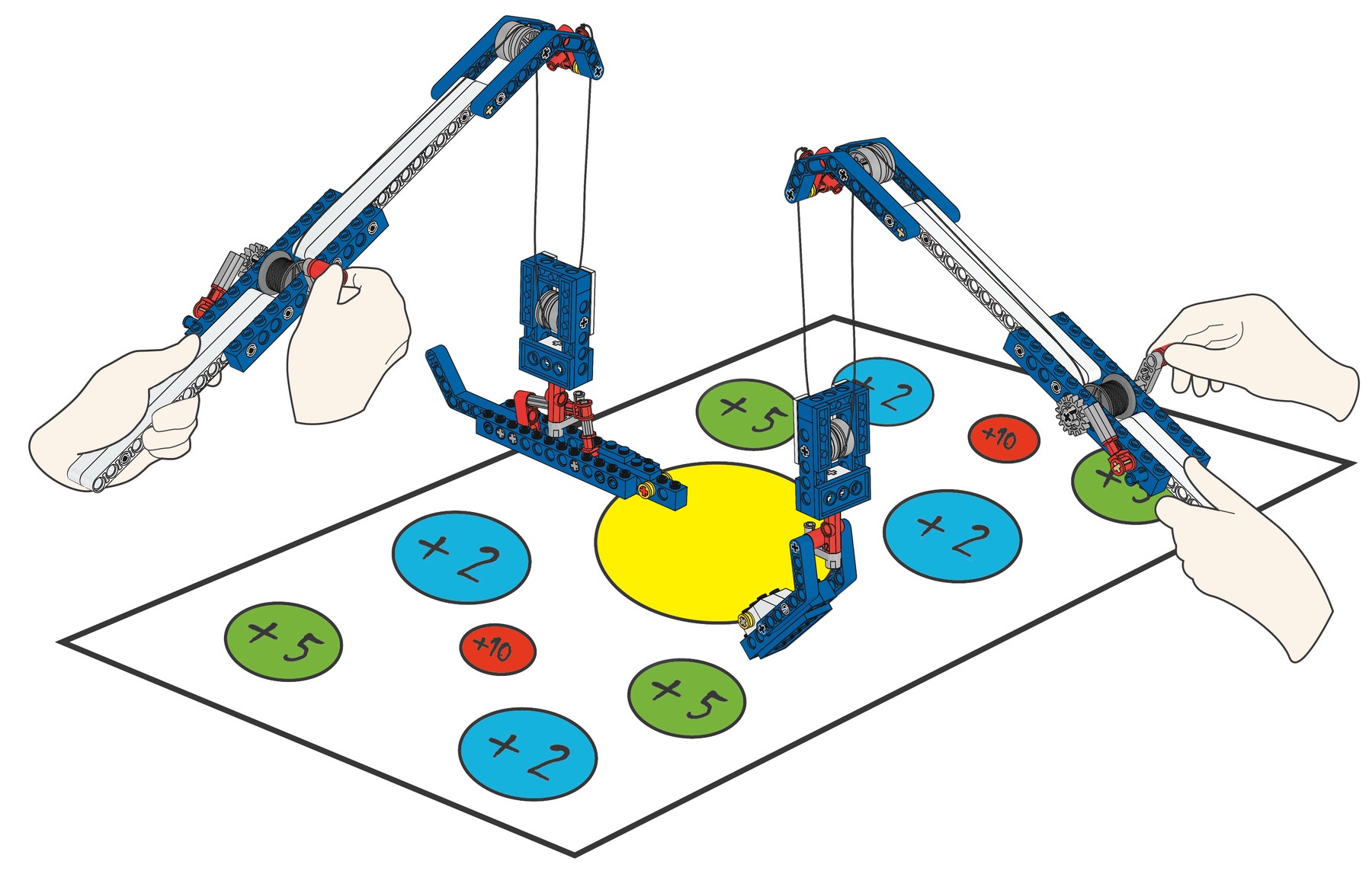 Students will explore the concepts of:
Using mechanisms – pulleys and levers
Investigating a pawl and ratchet
Designing and making a game
Forces
Machines that make work easier
Properties of materials
Scientific investigation